Hi!
Here's the update on the Beaded Journal Project. I've started to put the final touches on them and I hope to take more pictures to show the differences. Some of the differences may be subtle though. 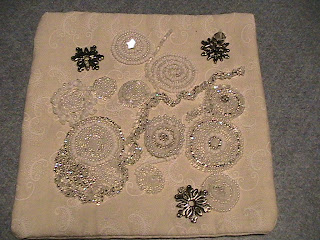 December's page is related to all the snow that we got in December. There were so many beautiful days and there were times when we caught the snow flakes and had a chance to look at them up close! 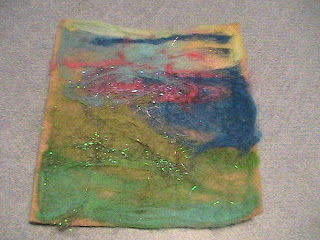 January is definitely a work in progress. I've actually finished it but I haven't taken any pictures yet. I felted the whole thing and then beaded it. I'd like to credit Kelly from bead art for helping me follow this and for her pointing to Jo Wood
On this picture, I attempted to teach myself perspective and how to make things seem closer and further. More pictures on this soon. 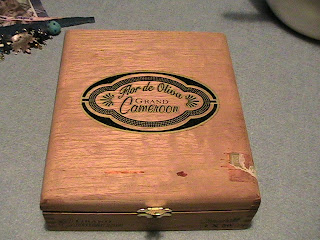 This is the box - a cigar box that I am keeping all the squares in. Think it's time to decorate it!!! 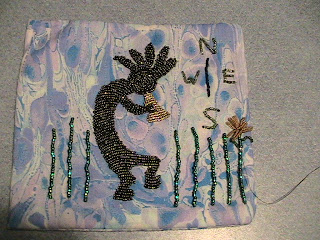 August. It's not finished. Those green lines? Corn.
When we travelled this summer, we saw so much corn and we participated in a gps explorer travel hunt and Kokopelli was the little dude icon/label for the hunt. It was so much fun! 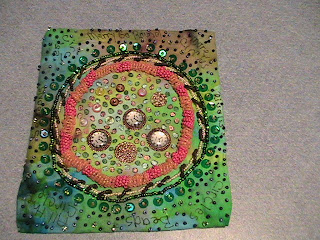 September is circles. I was practicing technique. I beaded over cording with the orange beads and the made circles out of peyote. 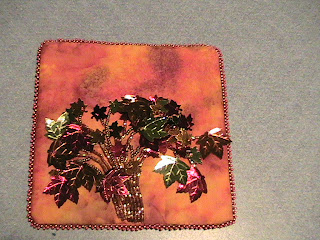 Need I say anything? It's the colour of fall. It's the texture of fall. These leaves aren't sequins, I had to punch holes in them. The material is so amazing, I didn't want to hide it! I don't actually like the amount of blank space though. It doesn't seem balanced. Suggestions? 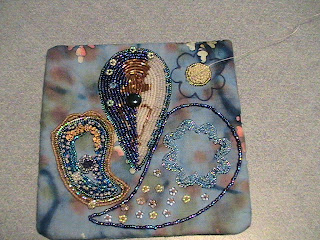 November was playing with paisleys. I love paisleys! I found this cardboard template stuff at the scrapbooking store and bought them to trace around and it was still harder to do then I like. I want to work at this. I have to say that finished project isn't too bad.
One of the things I did was couch cording down on the material.

I am trying to incorporate different techniques that I haven't tried in these pages and I really think that it's a great way to expand my horizons. There's always a comfort zone with our art, it's nice to push it once in awhile.

Great pages. It was fun to see so many at once. As far as your question on the blank space goes, how about adding some clear beads in some sort of curls, lines or objects. This would add a bit of "something" without covering up all the fabric you love.

I really liked your green corn and kokopelli page. I lived among fields of that green corn for several years.

I don't remember seeing these, denise...have they all been works in progress? (wip's?)

Looks like you are having lots of fun exploring, Denise. Can't wait to see how you decorate that beautiful box.

Wow, these are great pages, both in technique and inspiration.

Way to go girlfirend, I love them all!
December is delightful, you have captured the effect of ice & snow well!
I'm looking forward to seeing how January came out & love that you have tried felting a la Jo Wood & Kelly, I have been so tempted but have too many irons in the fire as it is..
Oh my, the cigar boxes!! I found a dozen of them in a box last month, I'd totally forgotten about them LOL - I'll be watching to see how you decorate this one ;9
August is very neat & I love your Kokopelli
Your September circles are super, I do like tht technique of beading over cord, I use it in my sea scapes a lot
The orange one is so you ~smile~ I think if you used some matching brown beads & did seed stitch in the blank area it would give you the effect you want without hiding too much of that delightful fabric
& finally, your paisleys are great too, it looks like you are having lots of fun. You are waaaay ahead of me my friend ;9

Your pages age great! I hope you'll bring them to the next Ottawa Bead Society meeting so I can see them in person.

YOu have been busy!

It's just sooooooo special to see them all together, even though some are not complete.

You're right the fabric background on your fall leaves piece is very nice. To my eyes, it doesn't seem to need anything more.

I really admire your consistent program of trying new techniques and ideas within the BJP. Awesome!

I just found your blog, very nice work. Hope you don't mind, I've tagged you for the 7 Things About You meme. You post the rules on your blog with a link to the person who tagged you, post 7 wierd or random things about you, and then tag 7 others and leave a comment letting them know they've been tagged. It's a great way to find new blogs - it's how I found yours. I'm glad I did and I'll be back to read more!

I'm in awe - your pages are absolutely spectacular!!

Just wanted to let you know - you've been tagged if you want to play! http://familyonbikes.org/blog/?p=124

Just having taken a beading class, I'm very impressed with your work. Your pages are all very lovely!! 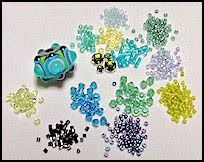